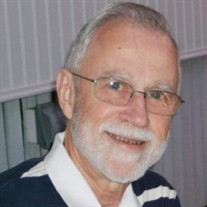 Albert “Gaide” Miller, born August 3rd, 1937, in Freeport Long Island and long-time resident of Lloyd Harbor, New York, died peacefully on February 3rd, 2022. Known as “Al” to his friends in business and employees, Al was a pioneer and entrepreneur. At the age of 23, he created a thriving business, Tinker Auto Parts, with a small loan from his mother. Tinker has now served faithful customers for over 60 years. Despite his enormous success he always referred to himself simply, as a “peddler”, a reference to when he started his business selling auto parts door-to-door in a cardboard box reinforced by duct tape. As a symbol of his humble roots, a box like this served as his briefcase throughout his career. Tinker was his life’s work and he valued the friendships created with his partners, employees and salespeople throughout the years. Known as ”Gaide” to his family and close friends, Gaide was known for his generous acts of kindness toward everyone that crossed his path. Nothing brought him more joy than to see others smile. Whether he was buying a bike for his favorite waitress's son, showing up with blocks for the neighbor's sick child or paying off an employee’s medical bill; he acted with love in his heart. With his younger friends, he played the “Pick a hand behind my back” game, and relished the moment each child walked away in awe with a silver dollar. If you saw Gaide with his dogs, you earned great respect for his rapport with them. Never a leash in sight, never a command over a whisper. His children and grandchildren were all taught the importance of a trusting relationship with an animal. Babies were thrown into saddles upon the minute they arrived at the Miller home, many unsuspecting guest’s paint jobs were ruined by the goat tap dancing across the car’s hood, and Gaide’s happiest place was at his desk with his Jenny-girl at his feet. A family favorite were rides in Caumsett State Park on his cherished Paint, Scout. By no surprise, his last independent act before he passed was a walk with his dog, Winnie. Known as “Pop pop” to his grandchildren, Pop pop’s pride in and love for his grandchildren was fierce. He had a deep desire to hear their stories, celebrate their successes, and spend time with them. His grandchildren are fond of their summer vacations together in Ogunquit, ME where they would drag him and his boogie board out of the water to warm up at the end of every beach day. He was unstoppable, whether it was buying a Maserati at age 76 just for “one last joyride,” riding roller coasters until everyone else went home, or galloping past the “No Horses” signs in Caumsett with a loud “Yahoo!”. He lived to make his grandchildren laugh. He was a showman, growing up in the halls of his mother’s music school, where he honed his vocal talents and performed with Palm Beach’s Apollo Boys Choir. Later in life, he lent his vocal talents to a Thanksgiving radio contest winning with his unmatched Turkey Gobble. His family remembers him as the life of the party, always the first to set foot on the dance floor and the last to leave. He was able to travel with family all over the world and loved discovering new places, art, antiques, culture, exotic foods and wine. He loved to travel with friends and would return home with hundreds of pictures, countless stories, and gifts for all. After one trip to the Galapagos Islands, he returned home dawning an “I heart Boobies” bucket hat - Blue Footed Boobies, that is. An interesting choice for a 70 year old man. But, this was Gaide - always doing whatever he could to make others grin. Mostly, he will be remembered for his inclusive, encouraging, loving heart that had no boundaries. He is preceded in death by his loving son, Ryan Gaide Miller. He left behind his loving and devoted wife of 59 years, Carol Fullerton Miller; daughters Lauren Leyden (Paul Leyden) of Portsmouth, NH and Valerie Miller (David Thiolas) of Kobe, Japan; daughter-in-law Julie Sciarratta; and five grandchildren, Meredith Leyden Topol (Martin Chase Topol), Charlotte Leyden, Vaughn Miller, and Luca and Romy Candon. He also leaves behind his sister, Judy Moore (Brent Moore); brother, Howard Miller (Arlene Miller); nieces, Holly Toomey (John Toomey) and Nancy Crugnale (Peter Crugnale); nephews, Glenn & Scott Riehl and Douglas Miller; and cowgirl sister-in-law Johnna Blanchard (Ed Russell). Albert Gaide Miller touched the heart of everyone he met and his presence will be greatly missed. In lieu of flowers, we ask that everyone touched by Mr. Miller lives in his spirit of giving; when you see someone struggling, lend a hand, a smile, and if you have one - a silver dollar. If you would like to make a donation to support one of his great loves, we ask that you consider a donation to the Little Shelter in Greenlawn NY (Help Us Help Animals (littleshelter.org)). The address: 33 Warner Road, Huntington, NY 11743

The family of Albert Gaide Miller created this Life Tributes page to make it easy to share your memories.

Send flowers to the Miller family.