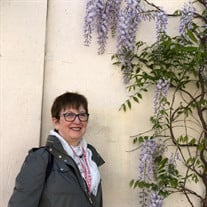 On Wednesday, December 2, 2020, Christine Marie Pisani of Huntington, NY, loving parent of two stepchildren and grandmother of five, passed away at age 71. Christine was born on August 27, 1949 to Alfred and Virginia Pisani of Plainfield, New Jersey. She graduated from the College of Mount St. Vincent with a bachelors in French language and literature. Christine then went on to receive her M.B.A. in finance from Fordham University’s Gabelli School of Business before becoming an executive assistant at Russell Reynolds Associates. Christine had a passion for traveling and discovering the many beauties of the world. After spending her junior year in college abroad in Paris, she fell in love with the city, becoming at heart, a true Parisian. Christine, or “Grandma C” as she was known by many, shared her passions for the world in countless ways. After moving to Huntington to be closer to her family, she became active in the Marble Hills community, served on the Board of Directors, participated in the Gourmet Group, brought her grandchildren to the Block Party and attended the wine tasting even though she never drank. She also hosted High Tea in the winter, baked the best cookies, and sang in the choir at the Unitarian Universalist Fellowship of Huntington. Christine was known for her quick wit, graciousness, and her deeply kind and loving spirit. Christine was preceded in death by her father, Alfred, her mother, Virginia, and her late husband, the honorable Judge William Kirchgaessner. She is survived by two brothers, Matthew and Alfred, three sisters, Mary Jane, Virginia, and Roseann, her stepchildren Laura and Paul, son-in-law, Xavier, daughter-in-law, Heather, her grandchildren Sabrina, Kaleb, Kenny, Isabella, and Violet, as well as 16 nieces and nephews. A viewing will be held on Sunday, December 6th, 2020, at A.L. Jacobsen Funeral Home located at 1380 New York Avenue, Huntington from 2-4 p.m. followed by a memorial service at 5 p.m. held over Zoom: Join Zoom Meeting https://us02web.zoom.us/j/84563694233?pwd=Z1NDcE44SHNxSHE4UVFITTRkVHlSQT09 Meeting ID: 845 6369 4233 Passcode: prayer In Lieu of flowers, the family prefers donations to be made in Christine’s honor to www.METAvivor.org.

On Wednesday, December 2, 2020, Christine Marie Pisani of Huntington, NY, loving parent of two stepchildren and grandmother of five, passed away at age 71. Christine was born on August 27, 1949 to Alfred and Virginia Pisani of Plainfield, New... View Obituary & Service Information

The family of Christine Marie Pisani created this Life Tributes page to make it easy to share your memories.

Send flowers to the Pisani family.