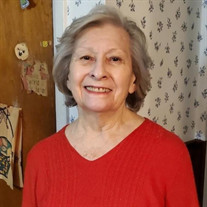 Dorothy M. Merrigan (Dot) 91 sadly passed away on Friday, February 11. Daughter of Robert Ownbey and Agnes (nee Snyder), she was born and raised in NYC along with her older sister Marion. In elementary school, she was advanced due to her intelligence and excellent grades. She continued on and successfully completed her high school education in 1948. She always cultivated a love of music and entertainment. She would often say that she “grew up in the movie theaters”. Many a weekend was spent with a lap full of candy as she would sit mesmerized by the glamor onscreen. Despite her shyness, she became involved in Police Athletic League (PAL) shows in her neighborhood where she enjoyed performing on stage. She also had a passion for sewing and crocheting that lasted a lifetime. Growing up, her children had closets full of her designs. Most windows throughout their home were adorned with her curtain creations. Whether or not she had a pattern to follow, she would always make something beautiful. Many family members and friends are fortunate to have a one-of-a-kind Dot original: a receiving blanket, a throw, a sweater, and so on. These precious items will continue to be cherished for years to come. At the ripe old age of 20, she married her longtime sweetheart and soulmate, Tom. He was called to active duty in the US Army shortly thereafter due to the onset of the Korean War. The newlyweds endured some periodic separations before reuniting in Germany. There they took advantage of the unique opportunity to enjoy a European honeymoon, visiting Italy, France, and enjoying the German culture around them. After the War, they came home and Tom began working at Underwriters’ Laboratories (UL) Inc. which was located in NYC at the time. Dot, who had enjoyed a brief career as a teletypist for the telephone company, settled into her true calling as a wife and homemaker. When UL moved out to Long Island, the happy couple went with them. In Melville, NY this dynamic duo lived out their dream of raising a family: Nancy, Susan, Michael (DawnMarie), and Kathy. She was then blessed to become Grandma/Nana to six grandchildren: Kristina, Courtney (Mark), Brittany (Hank), John (Margot), Lorraine (Peter), and Kasey. Her blessings did not end there. She was fortunate to be great grandma to Joseph, Madison, Christiana, Mikalya, Constantine, Harrison, and Lola. Dot and Tom also had a second family through UL. The friendships they made lasted well beyond the 44-1/2 years of Tom’s dedicated service to the company. They took numerous cruises, trips, and vacations with the “UL Crew”. The memories of house parties, company picnics, and dinners were some of the most special, not only for Dot and Tom, but for their children and grandchildren as well. Her love of music and entertainment came in handy when a retirement party or other event was planned. The “Melville Players” would meet to come up with skits and song parodies to celebrate the occasion. Dot and Tom were the Rodgers and Hammerstein of the group. Many an evening were spent at the kitchen table as these two would craft brilliant lyrics based on the honoree set to the tune of a popular song. Even after Tom retired, they were still called in to help create memorable ditties. Dot shared her love of music, from classical to contemporary, with her children. She also encouraged them to watch and appreciate movies from the golden age of cinema. There was just something about watching a movie she loved with her. Her joy was contagious. You found yourself liking it too. She took great delight whenever one of her children or grandchildren expressed an interest in performing. She was always a great cheerleader with the loudest applause in the audience. She was an avid reader and their home was filled with books. She fostered that love of the written word to her family as well. She encouraged writing, as she had enjoyed creating poems and short stories in her youth. She had a vivid imagination, no doubt enhanced by spending so much time watching movies on the big screen. Her love of crossword puzzles was well known. She and Tom would often sit at the kitchen table and complete them together laughing and joking the whole time. The couple was steadfast in their Catholic faith, attending the same church for 57 years. Their four children were raised to believe in God and to do what is right, even when it is not popular. She was an active Mom and Grandma. The number of costumes she made for Halloween, shows, or other events is legendary. When tasked with creating several outfits for a play taking place in the 1920s, she stepped up in grand style. Several people insisted the dazzling wardrobe was store bought and not homemade. Just another example of the caliber of a Dot original. Her life was all about her family. She was devoted to them and so proud of their every accomplishment, no matter how big or small. She filled their home with song and dance. Her cooking and baking skills were exceptional. She made you feel at home even if it was not your home. Many of her children’s friends called her Mom and she loved it. Her warmth, her hugs, and her smile were so wonderful. Her sarcastic wit could take you by surprise coming from such a sweet, little woman. But she was fierce in her love of God, her husband, and her family. She will be greatly missed. In lieu of flowers, the family suggests memorial contributions be made to any of the following charities that Dot gave to generously: Mercy First https://www.mercyfirst.org/donate St. Jude’s Children’s Research Hospital https://www.stjude.org/donate or Covenant House https://www.covenanthouse.org/donation

Dorothy M. Merrigan (Dot) 91 sadly passed away on Friday, February 11. Daughter of Robert Ownbey and Agnes (nee Snyder), she was born and raised in NYC along with her older sister Marion. In elementary school, she was advanced due to her intelligence... View Obituary & Service Information

The family of Dorothy M. Merrigan created this Life Tributes page to make it easy to share your memories.

Send flowers to the Merrigan family.