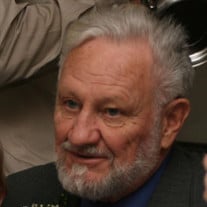 Edward G. Henselder, sadly passed after a two year battle with mulitple myeloma, on September 28, 2021. Beloved husband of Carol. Devoted father of Marie Henselder-Kimmel (Craig), Edward (Sabina), Janet, Paul (ex-wife Terri), Brian (Cathy), and the late Scott & Thomas. Cherished grandfather of Edward, Lisa, the late Mary Helen, the late Jennifer Ann, Joseph, Rowan, Katarina, Paul Jr, Riley, Chiara, and Reagan. Adored great-grandfather of Emma Hope , the late Myles Theodore, Christian. Ed grew up in College Point, Queens with his Styles cousins. He became an Eagle Scout in 1952, as was his father, his son Paul, and his grandson Paul, Jr. Ed served in the Navy from 1953 to 1957 then attended City College of NY to graduate with his degree in Electrical Engineering. His career at AIL Industries, which became Raytheon, included work on radar defense projects that led to numerous trips to Germany and a round the world trip to Australia, Thailand, Israel, and Germany, accompanied by Carol. He met Carol in Water Mill while working on a summer roofing job which led to a whirlwind romance and marriage 6 months later in January 1959 and 62 years of wedded bliss. Ed turned his love of football and lacrosse into decades of coaching lacrosse and football with the Huntington Boys Club then from 1992 to 2017 as coach and assistant coach for JV Lacrosse and Football with Walt Whitman High School. He was a lifelong fisherman, with a picture of him surfcasting placed on a postcard from Montauk in the 1950s. In lieu of flowers, the family requests that donations be made to the Walt Whitman High School Booster Club at https://www.wildcatbc.org/ or the veterans organization of your choice.

The family of Edward G. Henselder created this Life Tributes page to make it easy to share your memories.

Send flowers to the Henselder family.