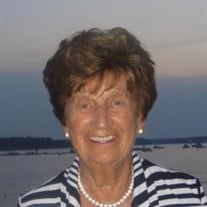 Gloria Mollico, soon to be 98, died on Monday, June 8, 2020 from the Corona virus. Born in Huntington, N. Y. on June 24, 1922, was the daughter of Charles Fox and Mary Schwab Fox and the wife of the late Vincent L. Mollico. She resided in... View Obituary & Service Information

The family of Gloria Marie Mollico created this Life Tributes page to make it easy to share your memories.