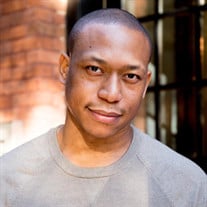 John Richard Hazel, the son of Santa and Ricardo Hazel, was born on July 8, 1983 in Brooklyn, New York and raised in the Bronx, New York. John was affectionately known to his family and close friends as “Sito” or “Johnsito.” He is survived by the love of his life, his wife, Renee, and two beautiful children, John John and Jade. John is the second of ten children. He is a big brother to Denese, Diana, Richard, Makenda, Carmen, Michael, Jose and Romellow, and a younger brother to Gloria. In 2001, John graduated from the Bronx Leadership Academy, and was the first of the Hazel family to attend college. John attended Morehouse College in Atlanta, Georgia with a full tuition scholarship from the United Negro College Fund. In 2005, John graduated from Morehouse with a Bachelor’s Degree in Spanish, Pre-Law. His family and friends will always remember John as a patient, loving and understanding man, who handled every situation with total calm.

The family of John R. Hazel created this Life Tributes page to make it easy to share your memories.

John Richard Hazel, the son of Santa and Ricardo Hazel, was born...

Send flowers to the Hazel family.