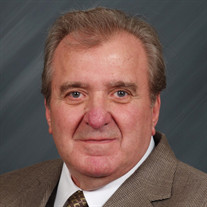 Joseph Francis Lauto, of Melville, on February 2, 2019 at the age of 80. Beloved husband of Antoinette. Loving father of Anthony and his devoted daughter in law Stephanie, Joseph and Valerie his excitedly soon-to-be daughter in law. Cherished... View Obituary & Service Information

The family of Joseph Francis Lauto created this Life Tributes page to make it easy to share your memories.

Send flowers to the Lauto family.