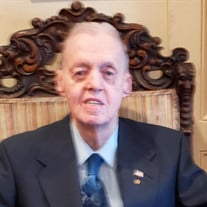 Michael T. Merrigan, (Tom) 89 sadly passed away on Tuesday, March 3. Son of Patrick Merrigan and Elizabeth (nee McEntegart), he was born and raised in NYC along with his brothers John and Matthew and sisters Claire, Josephine, and Ruth. From an early age, his intelligence was undeniable. He was quickly promoted through each grade in school, eventually graduating high school as its Salutatorian at just 15. He chose to attend NYU’s engineering program where he truly found his calling. While attending the university he joined the ROTC where he also excelled. He graduated college at 19 as the Korean War was occurring. He married his longtime sweetheart, Dorothy, and they soon enjoyed a European honeymoon, compliments of the military when he was called to active duty by the US Army. After the War, he came home and began working at Underwriters’ Laboratories (UL) Inc. which was located in NYC at the time. When the company decided to move out to Long Island, Tom and Dot went with them. It was here in Melville, NY that this amazing, loving couple forged a life together raising their four children: Nancy, Susan, Michael and Kathy. He was then blessed to become Grandpa/Boppy to six grandchildren: Kristina, Courtney (Mark), Brittany (Hank), John (Margot), Lorraine (Peter), and Kasey. And his blessings did not end there. He was able to be great-grandpa to Joseph, Madison, Christiana, Mikalya, Constantine, and Lola. For 20+ years of his career at UL, he was instrumental in championing the annual blood drive as its captain, helping set record high donations multiple times. After 44-1/2 years of dedicated service at UL, he retired as an Associate Managing Engineer and enjoyed relaxing with his wife, and spending time with friends and family. Known throughout his life as Tom, he was always a source of wisdom, knowledge and understanding to everyone. His sense of humor, dry and subtle, could always make you smile and laugh. His love of NY sports teams – the Yankees, Knicks, Giants and Rangers was devout. And his deep appreciation of history, music, movies and so much more truly made him a Renaissance man. He and Dot were steadfast in their Catholic faith, attending the same church for 57 years and raising their four kids to believe in God and to do what is right, even when it is not popular. He was not an “on the sidelines” Dad. He was very much involved in the lives of his children and grandchildren, often helping with homework, preparing meals, answering questions, applauding their accomplishments and consoling them through defeats. He tried to be there for every event, and if he could not be, he made sure he acknowledged it in some way. He was a true example of character, dignity and quiet strength. Though he was often the most intelligent person in the room, he would not let you know it or feel it. He was simply the kindest man who truly loved his wife and his family, and he will be greatly missed. In lieu of flowers, the family suggests memorial contributions be made to any of the following charities that Tom gave to generously: MercyFirst, www.mercyfirst.org, St. Jude’s Children’s Research Hospital www.stjude.org/, American Legion support. Donate to Help Veterans The American Legion www.legion.org, or Covenant House www.covenanthouse.org/donate.

Michael T. Merrigan, (Tom) 89 sadly passed away on Tuesday, March 3. Son of Patrick Merrigan and Elizabeth (nee McEntegart), he was born and raised in NYC along with his brothers John and Matthew and sisters Claire, Josephine, and Ruth. From... View Obituary & Service Information

The family of Michael T. Merrigan created this Life Tributes page to make it easy to share your memories.

Send flowers to the Merrigan family.