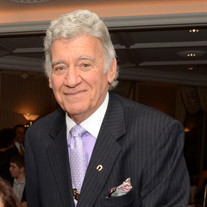 Paul Margarites born October 8,1935 in Astoria NY. Died April 4,2020 Huntington Station NY Paul is survived by his wife Margo, 4 children (Jim and daughter-in-law Nikki, Steven and daughter in law Dawn, Philip and Dina and son-in-law Greg) 6 grandchildren (Paul and wife Zoe, Chris, Maria, Athena and fiancé Rob, Zoe and Anastasia) and 1 great granddaughter Celeste. Paul was a pioneer in the Specialty Food business for over 30 years. Dating back to the 1960s, Paul and his brother opened four Foods of All Nations gourmet stores located on Long Island in the Walt Whitman Mall, Smith Haven Mall, and shopping centers in Eastchester and Manhasset. In the 1970’s they expanded locations and opened up the Gourmet Galley, a 2-store chain in Westport and Greenwich CT, introducing consumers to unique European specialties. The concepts that he developed in their stores were new innovations back in the 60’s &70’s and are now the foundation of the specialty food business today. Many of the unique items that were specialties were introduced by him and are now staples in our homes today. After selling his business (1978) he went on to grow and develop the specialty cheese business at Long Island provision in Greenlawn, NY. He imported cheeses to the US from all over the world, including raw milk cheeses from France, Cheddar from England, Gouda from Holland, and cheeses from Switzerland. His showmanship and unique merchandising got him a cover story of the Specialty Food Magazine in 1980. During this time, he still had that burning passion to create and merchandise food on a grand scale, so he went to work for Daitch /Shopwell to design and launch a new type of food shopping experience. It was called The Food Emporium. Paul was the deli/dairy director of this chain until A&P Supermarkets bought the company and promoted him to Senor VP of Deli Merchandising nationwide installing the Food Emporium concept nationwide. Paul’s funeral will be a private ceremony at St Paraskevi Greek Orthodox church in Greenlawn, NY. In Lieu of flowers please make a donation to the St Paraskevi Grotto Shrine Restoration project. May his memory Be Eternal.

The family of Paul Margarites created this Life Tributes page to make it easy to share your memories.

Send flowers to the Margarites family.