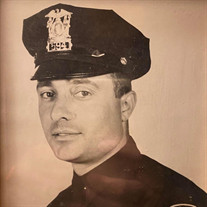 Salvatore J. De Lucia, of Huntington Station, sadly passed away on November 1, 2021 at the age of 87. Loving Husband of Margaret. Devoted father of Stephen (MaryAnn) and Diane Starling (Michael). Salvatore was born in Central Park, NY (now Bethpage) and grew up in Oyster Bay. He graduated from Oyster Bay High School in 1952 and promptly volunteered to serve his country. Salvatore was a Proud Navy Veteran of the Korean War where he served on both the USS Kearsarge (CV-33) and the USS Yorktown (CVA-10). He bravely served as a Detective in the Suffolk County Police Department. Salvatore was a member of the VFW, the American Legion Post #4 (Oyster Bay) and the USS Yorktown Association (Charleston, SC). He was also a member of the Suffolk PBA and Suffolk Detectives Association. Additionally, he was an active member of the International Police Association (he also competed in his earlier years in the Police Olympics and was a champion in the discus). Salvatore received many accolades and awards over his distinguished careers in the US Navy and the Suffolk County Police Department. In 2009, Salvatore was inducted into the Oyster Bay Athletics Hall of Fame for his exploits in the 1950s as part of the championship football team under Coach Crawley. Oyster Bay held a special place in Salvatore's heart and he maintained friendships throughout his life with the people of Oyster Bay. As a young person, Salvatore was a member of St. Dominic's Roman Catholic Church and his experiences there set the stage for a life well lived. He was especially proud of his teammates on the American Legion Baseball team during his high school years and the way the town pulled together to support them. Salvatore was his high school vice president and his interest in civics stayed with him throughout his life and was passed onto his family. He was a great and lifelong loyal friend to many and a friend to all animals! He loved his "grand cats and grand dogs". He was a longtime member of St. Hugh of Lincoln Roman Catholic Church in Huntington Station and encouraged his family to love God and be Good Neighbors. Salvatore cared quietly but deeply about his family and neighbors and there is nothing he would not do to help others, many times without anyone knowing.

The family of Salvatore J. De Lucia created this Life Tributes page to make it easy to share your memories.