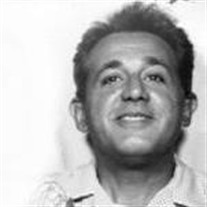 In the early evening on Sunday, May 23, surrounded by his loving family, Vincent Francis D’Agostino passed on after 94 incredible years. He left this world peacefully, in the house where he and his beloved late wife Rita hosted decades’ worth of Christmases and other family celebrations with their children, grandchildren, and friends. Vincent was born November 6, 1926, the second of three sons to first-generation Italian immigrants John and Catherine D’Agostino. When their father, a World War I veteran, died, the three-year old Vincent and his two brothers, Ralph and John, grew up with their mother in a single-bedroom apartment in Corona, Queens. Despite these circumstances, Vincent often looked back on his childhood very fondly. Among his happiest memories from that time were the raucous stickball games he played with the other neighborhood kids. Even into his old age, he would proudly recall to friends and family that he’d been a particularly good batter back then — a “two-sewer hitter.” As a young adult he was the shortstop and lead off hitter for the local fast-pitch softball team, the Corona Warriors, who became the New York City softball champions in the late 1940s. During the final two years of World War II, Vince was stationed in Asia as part of the U.S. Army’s occupation of Japan. Mercifully, he never had to see combat. Though he was very proud of his service and had countless interesting stories from that time, he was always humble about it. After the war, he set about finishing his education. With only a trade school diploma at the time, his next step was obtaining a GED — which he did in only one year, culminating in six grueling regent exams over the course of a single week. Finally, he enrolled at Brooklyn Polytechnic Institute, where he obtained a BS in organic chemistry in 1951. He would later go on to earn a Master’s Degree in organic chemistry in June of 1957. While attending college, he met the love of his life, Rita Marie Filardi, on a blind date. They were married on October 25, 1953, and stayed together for 61 years until Rita’s passing in 2014. Vincent was a devoted and doting husband, and he remained steadfastly in love with his wife until his final moments. Vincent’s boundless love for learning made him a lifetime student. This was a man who read calculus books for fun, and whose drive to continue his education kept him attending night classes even after he’d begun working to support his family. His desire for knowledge never faded, and he was an avid reader well into his 90s. This enthusiasm carried over into everything Vincent did. He was an active husband, father, student, and worker. He coached little league teams, built clubhouses and a basketball court for his kids, built decks, tended to a garden, and then some. His tireless energy was borne out of an enthusiasm for life, and for the all-important friends and family with whom he surrounded himself. A true optimist in every sense, he faced challenges head on with a “just try” attitude. Though his upbeat spirit meant there was plenty to enjoy in life, Vincent had some favorites. He adored his wife. He had boundless love for his five children, and later his grandchildren and great-grandchildren. He loved pasta. He cheered enthusiastically for the New York Mets. Left to his own devices, he enjoyed gardening and reading. In the company of others, he delighted in (and was intimidatingly good at) scrabble and all manner of card games. Along with his parents and two brothers, Vincent is predeceased by his beloved wife Rita and their wonderful youngest son, Peter. He is survived by his children Vincent (M. Nicolys), Catherine, Michael, and Susan (M. Floyd), and his daughter in law Mary (M. Peter); his seven grandchildren: Rachel (M. Kris), Clifford, and William, Vincent, Chloe, and Jenna, and Rita-Grace; his two great-grandchildren, Lily and Jack; and sixteen nieces and nephews. A memorial service will be held in Vincent’s honor on Thursday, May 27. A funeral procession will leave Jacobsen’s Funeral Home in Huntington at 11:00 a.m., and will travel to Calverton National Cemetery in Riverhead, New York, followed by a military funeral at 12:30 p.m. Vincent will be buried next to his wife Rita. Donations may be made in Vincent's Memory to St. Jude's Children's Hospital. www.stjude.org.

In the early evening on Sunday, May 23, surrounded by his loving family, Vincent Francis D&#8217;Agostino passed on after 94 incredible years. He left this world peacefully, in the house where he and his beloved late wife Rita hosted decades&#8217;... View Obituary & Service Information

The family of Vincent Francis D'Agostino created this Life Tributes page to make it easy to share your memories.

In the early evening on Sunday, May 23, surrounded by his loving...