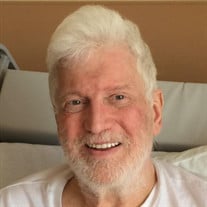 The family of William Sansom request for donations to be made in his honor in lieu of flowers. William Lawrence Sansom, 72, of Lake Ronkonkoma, formerly of Huntington, Long Island died on July 4th, 2019. Mr. Sansom, or Bill to his friends, was born in Atlantic City, NJ to Mildred Nash Sansom, opera student, and William Morrison Sansom, son of a newspaper family and journalism grad who broke career ranks to become a pilot for Pan American Airways. He is a descendent of Governor William Bradford of Plymouth, Massachusetts as well as James Nash, a Massachusetts soldier in the revolutionary war. From the very beginning, Bill had music, flight and language in his life. Bill’s early years were spent in Rio De Janiero where Pan Am transferred his father to fly their routes. By 1950, Bill’s small reign over his family had been upended by the arrival of his two siblings, brother Bob and sister Carol. The family had returned to the US and settled in Huntington Station. When Bill’s parents took a big chance and paid $2000 to join a group of airline personnel and move to a place called Fiddler’s Green in Lloyd Neck, they provided Bill with a platform for all the adventures a kid could ever want growing up. He built and flew model airplanes, developed his music, photography and love of Long Island. Bill learned to sail on a Lightning and later crewed on racing boats off Block Island. Bill joined Old First Presbyterian Church and attended Cold Spring Harbor High School where he excelled in sports and drama, started a band and played for school dances. He rebuilt an old Jaguar and continued his writing, his pieces appearing in the school’s creative publications. Bill served in the Marine Corps in the Vietnam War, returning home with an AK-47 wound to his leg, earning a Purple Heart. During his full recovery, Bill resumed his music, writing and photography while completing his college education at C. W. Post College. He later composed and performed the music for his sister’s wedding. He went to work for an advertising agency, writing jingles for commercials. Later, Bill’s guitar skills earned him numerous awards from the Veteran’s Administration National Creative Arts Competition, including for Original Composition. Bill’s love of design, flight and fancy were happily married in the creation of a remote controlled blimp that he and friend Bill Dotson designed, developed and flew in the Guggenheim Museum. He created and installed lighting elements for night club environments while working for the Starfire Company. His work could be seen in the St Francis Hotel in San Francisco and the Visage Club in Manhattan. When Bill’s leg wound suddenly resurfaced in 2015, he handled a year in a wheelchair following the required surgeries by using photography to express his new perspective. He explored any new field or phenomenon that took his interest, wrapping it into his emails or posing questions to his friends and his growing email list. Thus, we learned about cathedrals and colliders and debated the flight of birds. Bill had an extraordinary gift for creating imagery through language. He had a great interest in life, knowledge, history and the value of perspective. He looked for connections of ideas and events that otherwise seemed unrelated. He sought ways to express these thoughts through his writings and by sharing them he made us stop and think, and frequently to engage. Although Bill had tremendous resilience, he needed a partner, a defender, and he finally found one in Francee, his loving partner for his last few years. This was a blessing indeed. Together, they attacked Bill’s many health challenges to come, and shared new adventures including long road trips to friends and family. Surviving Bill is his sister Carol and her husband Jim, Aunt Eva Nash, cousins Bill Nash, Mark Nash, Maria Alley and Juanita Akers. Preceding him in death is his brother Robert, his Mother Mildred and Father William M. The graveside service will be in Huntington Rural Cemetery on Monday, July 15, 2019 at 2pm. In lieu of flowers, donations to the following organizations are requested. American Lung Association https://action.lung.org/site/Donation, Wounded Warrior Project www.support.woundedwarriorproject.org., North Shore Animal League America www.animalleague.org

The family of William Sansom request for donations to be made in his honor in lieu of flowers. William Lawrence Sansom, 72, of Lake Ronkonkoma, formerly of Huntington, Long Island died on July 4th, 2019. Mr. Sansom, or Bill to his friends,... View Obituary & Service Information

The family of William Lawrence Sansom created this Life Tributes page to make it easy to share your memories.

The family of William Sansom request for donations to be made...

Send flowers to the Sansom family.